If Wagyu is the King of Beef, then IbÃ©rico is the undisputed King of Pork. Produced only in a select few provinces of Spain and parts of Portugal, IbÃ©rico is the meat of the Iberian black pig, known as Pata Negra in Spanish. Farmers have specially bred these pigs for centuries to be smaller and leaner than normal pigs, with most of their fat contained within the muscle. This breed, with its intensely marbled meat, combined with their unique diet, produces some of the most amazing pork youâll ever taste.

Iberian pigs were once bred from wild boars, and are native to the Iberian Peninsula, a region comprising Spain and Portugal. These pigs have big appetites that help them gain their fat, which is important to achieve a supreme flavor and texture. Just like wagyu beef, Iberian pigs have a large amount of intramuscular and epidermal fat that results in a melt-in-your-mouth texture.

Within the Iberian Peninsula, Spainâs production of IbÃ©rico pork is confined to the provinces of CÃ³rdoba, Salamanca, CÃ¡ceres, Huelva, and Badajoz. Protected by the EUâs Protected Designation of Origin, or PDO, Spanish JamÃ³n IbÃ©rico follows strict guidelines for producing and grading this cured product. Portugal also produces IbÃ©rico pork, under the name Presunto IbÃ©rico.

What makes IbÃ©rico so special?

Their natural and extensive intramuscular fat, or marbling, is what separates Iberian pigs from other breeds. Itâs this marbling that gives IbÃ©rico its deep, rich flavor and smooth, buttery texture. The fat is so buttery, in fact, that while eating thin slices of cured IbÃ©rico, you can actually feel it melting in your mouth.

To get the highest quality of IbÃ©rico possible, farmers put in a lot of work raising their pigs. Their pigs need to be in a stress-free environment, since any tension caused by adrenaline can lower the quality of meat. Iberian pigs are often allowed free range of the Spanish countryside, where they enjoy the fruits of the land and grow fat and happy.

The ecosystem in which the pigs live is known as the Dehesa. The Dehesa is a preserved forest and meadow unique to the Iberian Peninsula, and used not only for grazing Iberian pigs, but red Andalusian cattle and Morena sheep as well. This area experiences mostly mild winters and extremely hot summers, kept cool in the shade of ancient oak trees. Iberian pigs in this region have been bred to be hardy animals and have developed their muscular fattiness to thrive even in harsh environments.

The Dehesa is a rich landscape with natural grasses, olives, nuts, and berries, which the pigs feed freely on throughout their lives. The oak trees that cover the Dehesa also produce an abundance of acorns (known in Spanish as Bellota), which are high in nutritional value and fat. These acorns provide nearly half of the weight of the pigs before harvest, and give the meat its deliciously rich and nutty flavor.

What are some of the best cuts of IbÃ©rico?

When an Iberian pig goes to harvest, great care is taken by butchers to make every cut count. Spanish butchers are highly skilled and able to break down a pig into many different cuts, achieving an even greater variety of portions than butchers in America. Some of the most delicious and unique cuts include the Secreto, the Pluma, the Solomillo, the Paleta, and the JamÃ³n.

This cut from behind the shoulder is literally hidden between the shoulder and pork belly. Itâs no surprise that its name comes from the Spanish word for âsecretâ, given the Secretoâs out of the way location. Once kept exclusively to the butchers, the Secreto is a small, thin cut similar to skirt steak in looks, with a tender, yet springy texture. The Secreto is so deliciously marbled and buttery that itâs become one of the most desirable cuts on the Iberian pig.

Considered a prized cut in Spain, the Pluma comes from the end of the loin, just above the shoulder. This cut gets its name from the long, thin shape of the meat, meaning âfeatherâ in Spanish. Beautifully marbled and unbelievably supple and soft, itâs not hard to see why the Pluma is so highly praised.

The Solomillo is the tenderloin of the pork, and the leanest cut on the pig. The muscle that produces the tenderloin works very little, resulting in one of the most tender pieces of pork you can enjoy. This cut makes an impressive roast, but is also commonly cut into thick, juicy pork chops.

The most prized (and most expensive) cut of IbÃ©rico is the JamÃ³n, or the back leg of the pig. This cut is used almost exclusively to make JamÃ³n IbÃ©rico, a cured meat with extraordinary texture and flavor. The highest grade of JamÃ³n IbÃ©rico cures for an incredible 36 months, and even lower grades still cure for at least 24 months, going through a complex process that transforms the meat into an absolute delicacy. Master carvers know just how to cut JamÃ³n IbÃ©rico into paper thin slices, allowing the shiny white fat marbled throughout to literally melt on the tongue.

From the shoulder on the front leg comes the Paleta, a cut nearly as prized as the JamÃ³n. Cured from between 18-24 months, the Paleta is similar to the JamÃ³n in a lot of ways, but has perhaps an even deeper cured flavor, due its smaller size allowing more salt to seep into the meat during curing. When cut open, the Paleta is a deep red color with attractive white streaks of fat, and, like the JamÃ³n, is best served sliced thin.

Stage 1: The pigs are butchered, and the fresh JamÃ³n legs are completely coated with sea salt. The salt remains on the meat for a week, or up to 10 days, depending on the weight.

Stage 2: The JamÃ³n is rinsed of any salt on the surface, and stored in cold rooms for one to two months, at a temperature between 37Â°F and 43Â°F, and with a high relative humidity between 80-90%. The salt penetrates the legs completely in this stage and begins the dehydration and preservation process.

Stage 3: Following the second stage, the hams move to a âSecaderoâ, or natural drying area. Temperature and humidity are controlled through ventilation here, with temperatures fluctuating between 59Â°F and 86Â°F. The meat spends 6-12 months in this area, during which time they lose much of their moisture and become dense and aromatic as the fat disseminates through the muscle fibers. This is also usually the final stage in producing JamÃ³n Serrano.

Stage 4: The final stage for JamÃ³n IbÃ©rico; the hams are moved to cellars, known as âbodegasâ, and hung for two years or more. The cellarâs cool temperatures allow the JamÃ³nes to continue the maturation process and encourage the growth of natural microbes that gives JamÃ³n its unique flavor and aroma. Only artisans know exactly when the hams are at the peak of their flavor, drawing upon years of experience to determine exactly when to sell the finished product.

The resulting JamÃ³n IbÃ©rico is decadently rich and silky, with a firm, meaty texture owing to the pigs themselves freely roaming the Dehesa. The taste is nutty and sweet, with the pronounced marbling of the meat all but glistening when cut and literally melting as soon as it hits your tongue. Every step of the way, this meat is treated like the royalty it is, and itâs truly evident in every perfectly shaved slice.

Once harvested, JJamÃ³nes are given one of four labels, based on the purity of the breed, the length of their curing time, and the amount of acorns the pigs consumed during the final months of their lives. The four labels are:

How do you cook and serve IbÃ©rico?

If this is your first time cooking IbÃ©rico, try simple seasonings like salt and pepper to really taste the nuttiness and sweetness of the meat itself. When cooking IbÃ©rico, think steak; IbÃ©rico isnât your run-of-the-mill pork. The same method of cooking, then resting applies here: Sear the meat on each side, then finish in the oven to medium-rare to enjoy IbÃ©rico at its best.

If youâve heard that pork needs to be cooked to well done to be safe to consume, itâs because of a parasite that used to be prevalent in pork products, which causes a disease called trichinosis. In recent years, this parasite has all but disappeared from modern herds, and can also be killed by freezing, or by heating to 137Â°F, well below the 145Â°F of a medium-rare cut of pork.

As for JamÃ³n IbÃ©rico, the best way to enjoy this cured product is when itâs cut wafer thin. Allow the JamÃ³n to come to room temperature for that melt-in-your-mouth texture before serving. JamÃ³n IbÃ©rico can be enjoyed on a charcuterie board, paired with a dry Spanish Red or Manzanilla wine, or simply savored slice by perfect slice.

Stone Crab of the Gulf Coast 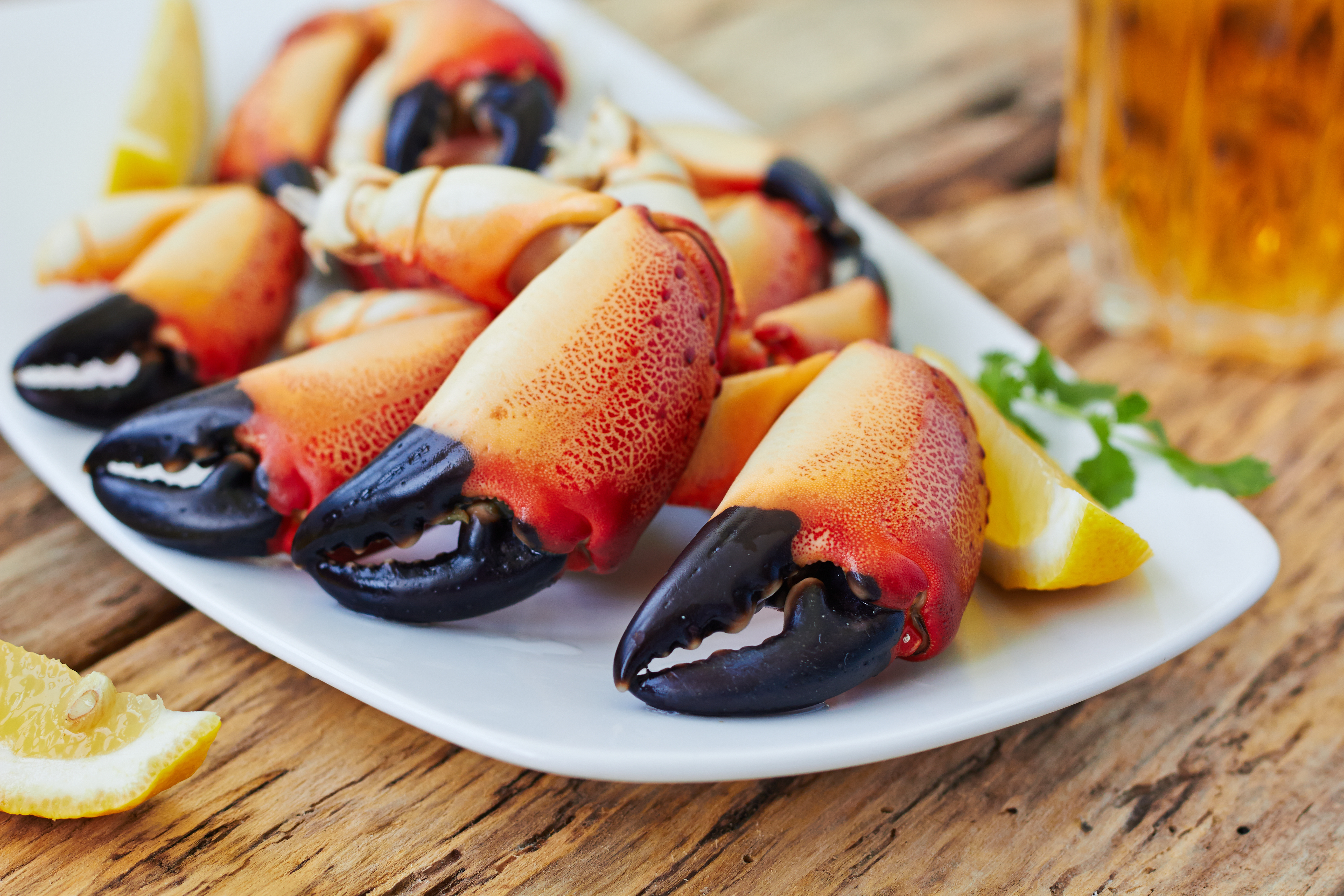 Learn about the world's most exclusive mushroom